How is the behavior of the rainbow parrot? 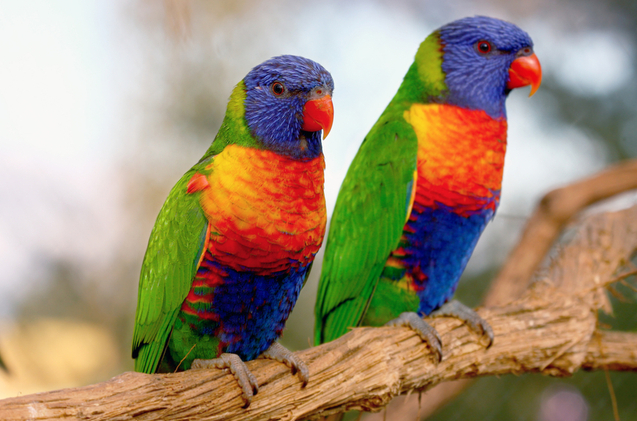 Surely you’ve never seen anything so shiny. The bright colors of the rainbow parrot are captivating. But don’t be distracted by its appearance, it is also a very intelligent and lively type of parrot. Find out how the rainbow parrot behaves and what it needs to live happily.
Orange, red, green, blue, yellow… Count, count. The rainbow parrot has practically all the colors of the phenomenon that gives it its name. At nearly 12 inches tall and with its red and yellow bill, this parrot is an amazing pet.

What should the cage of the white goldfinch be like?

A large cage is the best space for them. As with other parrots, it needs a lot of space to be able to fly and exercise inside it. But in his particular case you will have to take into account a few more things.
The behavior of the rainbow parrot is great for a home, since it is very social and can live as a couple in a large enough cage. But you’d better not add any more companions. Its character is more territorial than that of some other parrots and it could become aggressive towards them.
This attitude is mainly due to the fact that the intrusion of other members threatens their sources of food and their potential nest. Despite its size, nothing stops it from facing larger species in order to defend its nest. So now you know, if you like rainbow parrots, you’d better bet on a single specimen or a couple.

How does a rainbow parrot play?

And it is that, although he does not like to share his cage more than with his partner, the rainbow parrot is very playful. The females are the ones that feel predilection for toys , especially those that make noise or allow them to climb and peck.
Rainbow parrots are very intelligent so they need a stimulating environment. Include some branches inside the cage for her to perch on so she can sharpen her nails as she climbs. And he’s also a fan of the bathroom, so having a bathtub at the bottom of the cage will be ideal. You will see that his behavior is much more relaxed if he can bathe frequently as he is used to in nature.
Of course, we have already told you that rainbow parrots are very intelligent, which means that they can also get bored easily. That is why it is better that you have a great variety and change them weekly, this way you will have different activities to do.
Also, remember that the rainbow parrot also needs to spend time outside its cage. Close doors and windows and let it fly free for about an hour a day.

Teaching a Rainbow Parrot to Talk

Another of the traits it has in common with other parrots is its ability to imitate . In your case, training to do so can be very easy. It is enough with small sessions in which you repeat words to him for about 5 or 10 minutes so that he begins to imitate them. But remember! When you finish give him some treat , he will love it.
Now that you know how the rainbow parrot behaves and the care it needs, go ahead and share your life with one of these cheerful little parrots. And by the way, don’t be scared if you see him sleeping on his stomach, he loves it. You won’t regret welcoming him to the family!